Mom always said “you must have breakfast; it is the most important meal of the day.” Well it looks like mom was right again. Below are three of the many studies showing the 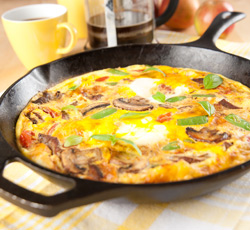 positive effects of having breakfast.

A study from the University Of Pennsylvania School Of Nursing showed children who regularly eat breakfast get significantly higher scores in verbal and performance IQ tests.

"In one of the first studies to examine IQ and breakfast consumption, researchers examined data from 1,269 six year old children in China, where breakfast is highly valued. After adjusting for seven sociodemographic confounders, they concluded that children who did not eat breakfast regularly had 5.58 points lower verbal, 2.50 points lower performance, and 4.6 points lower total IQ scores than children who often or always ate breakfast.

“Childhood is a critical period in which dietary and lifestyle patterns are initiated, and these habits can have important immediate and long-term implications,” said lead author Jianghong Liu, PhD, RN, FAAN, associate professor at Penn Nursing. “Breakfast habits appear to be no exception, and irregular breakfast eating has already been associated with a number of unhealthy behaviors, such as smoking, frequent alcohol use, and infrequent exercise.”"1

"Research shows about 18 percent of Americans older than age 2 regularly skip breakfast, said Nancy Auestad, PhD, vice president of regulatory affairs at the Dairy Research Institute. They are missing out on key nutrients, she said, pointing to statistics that show breakfast-eaters get about 17 percent of their daily calories from breakfast as well as a significant portion of their daily recommended intake of several key nutrients, such as Vitamin D (58 percent), Vitamin B12 (42 percent) and Vitamin A (41 percent).

Lastly, a study from the University Of Minnesota School Of Public Health presented by Andrew Odegaard, PhD, an epidemiologist at the University of Minnesota, found some staggering results regarding those who do not eat breakfast.

"The study included more than 5,000 men and women; none of which had type 2 diabetes when they entered the study.

Seven years into the study, they filled out diet questionnaires that included a question asking how many times a week they ate breakfast. They were followed for an average of 18 years.

After reading all three studies, I am glad I had my six egg white omelet with mushrooms this morning! Did you eat breakfast this morning?