We’ve all seen that person who's turning red in the face while maxing out, or that person who sounds like a leaky tire or hissing snake. Those people are the reason that I am writing this article. 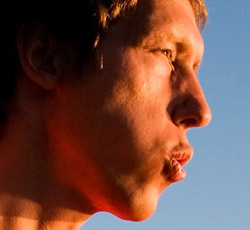 Proper breathing during exercise is a very important, yet a mostly overlooked action.

In general, proper breathing begins with correct inhaling. This process is done by inhaling rhythmically through the nose. When you inhale you take in oxygen which gets transported from your lungs to your blood, then to your muscles. Your muscles then use the oxygen during cellular respiration to transfer energy from glucose and fatty acid molecules to a molecule called adenosine tri-phosphate, otherwise known as ATP. This ATP is then used for energy to allow muscular contractions.

What one must realize is that during the above cellular respiration phase, Carbon dioxide is created. This carbon dioxide is considered a waste product and is removed from your muscles to your bloodstream and exits out through your lungs upon exhaling. Proper exhaling is done through the mouth upon the exertion phase of the exercise being performed.

While the above sounds simple, let me recap the proper inhale/exhale timing with a typical weightlifting movement example. When performing a squat, inhale as you are descending with the weight, then exhale when you are rising up.

Consuming antioxidants have shown positive effects by allowing oxygen to be used efficiently.

Vitamins such as vitamin A, vitamin C, vitamin D and CoQ10 have shown to have an abundance of antioxidants in them. Examples of antioxidant rich foods include artichoke hearts, blueberries, black berries, cranberries and strawberries.

Consuming essential fatty acids has also been shown to increase the amount of oxygen the hemoglobin in the bloodstream can carry. The human body does not produce essential fatty acids like Linoleic Acid and Alpha Linolenic acid, therefore supplementation with the above is recommended. As far as food is concerned canola oil, flaxseeds, safflower oil, soy beans, sunflower oil, and walnuts are great natural sources. VPX can also make your life a lot easier by taking ThinFat and the Zero Impact Bars, which I happen to use multiple times daily.