3 months on the VPX NO-Shotgun/Synthesize Stack

Before I get into my noticeable strength gains I want to tell you a little about me for those of you who don't know: It is a well known and well documented fact that l have used anabolic steroids on and off during the last 30 years. The fact that I have has put me in the auspicious category today, at the age of 50, of many former juice heads who naturally produce girly amounts of natural testosterone. Hence, for the last three years, I have been on a doctor prescribed replacement dose of 200 mg of testosterone a week. This has brought my total test levels up from 120 to a little over 800 – normal range for a male in his 30s. So, for all the detractors out there who have followed my exploits in Mexico and care to associate any strength gains I make today with any extended stays south of the border, your assertions don't hold water. Except for a brief stint in Mexico last summer where I spent a few weeks on a slightly higher dose, my replacement therapy is all I'm doing, and all I have done for three years.

Just about the time I got on hormone replacement therapy I began a long and bitter custody battle for my young son. This was a very stressful period of my life and caused me great distress. It was complicated by a nagging shoulder injury, the loss of my job, and my house to foreclosure which necessitated me moving from Florida to NY to pursue work. Those problems eventually worked themselves out: I won custody of my son, I was able to short sell my house and avoid foreclosure, and I got a fantastic job opportunity with VPX/Redline that facilitated a move back to sunny south Florida. Unfortunately, overcoming those challenges put me in pretty bad shape. At my worst I was tipping the scales at about 190 pounds with at least 20% of my 5'9" body slathered in body fat. And while my shoulder injury had healed itself from inactivity, I was so weak I could barely shoulder press a pair of 20 pound dumbbells for 12 reps!

I started work at VPX/Redline in October and immediately began getting familiar with their product line. Jack Owoc, CEO/CSO of the company was very gracious in including my personal supplement needs into my compensation package. Initially I was more interested in shedding some of the body fat I had accumulated than anything else, so I got really into the VPX/Redline diet product line – especially Ultra Hardcore. This incredible fat burner not only caused me to shed body fat (along with a strict keto diet and cardio), but it also fueled my workouts like never before. I was back training with killer intensity and great consistency and making up lost ground in a hurry. Once I added VPX Protein Rush and Zero Carb protein supplements into the mix I really started gaining back lost ground.

This reinvigoration of my training was all motivated by an exciting ulterior motive: In January, my smoking hott 25 year-old fiancée was moving in with me. Not only was she moving in, but she was also going to take up residence as my regular training partner. My girl is no stranger to an intense workout and can hold her own with any top level figure competitor on the pro circuit. She is definitely hardcore. So, things were about to get real.

Once she moved in we adopted an early morning training ritual that began promptly at 5:45 AM in the gym. That's when I added the NO-Shotgun/ Synthesize stack.

I've blogged before about how this stack affected my strength levels and power I was able to generate while training and riding my bike. But now, after three months of steady training using the stack, and with an attentive and motivating training partner, I can report on some serious gains in strength with last week being the most impressive list of PRs in my entire 37 years of weight training! And, my body composition has totally changed. I'm up to 215 pounds at less than 10% body fat! Make sure you get this right – now, at 50 years of age, and on 10 – 20 times LESS juice than I've ever taken, I'm the strongest I've EVER been, and am the biggest I've ever been with the least body fat.

This is a pic of me this morning taken with my phone: 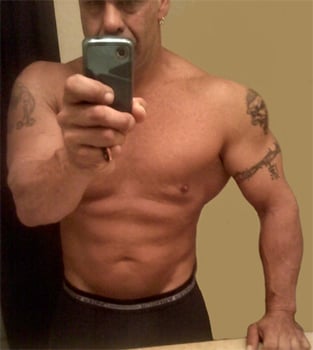 How strong? Ok, I'm no Derek Poundstone, but for me, considering my age, size, injury history and regular ups and downs, I'm not going to complain about these all time best personal records: flat bench dumbbell presses with 130s for six reps, seated dumbbell presses with 90s for six reps (remember I could barely do 20s after my injury); and one arm dumbbell rows with a 150 for 15 reps – I have a video of that one: http://forum.vpxsports.com/Topic4772.aspx. And I'm not stopping here! I have a goal of shoulder pressing 100s in the next few of weeks. If my gym had heavier dumbbells than 150s I'd row them, And I'm not going to be satisfied flat benching until I can rep them. I feel as unstoppable and invincible as I've ever felt on gear – lots of gear!

Once again, the only thing different that I have added to my training/diet/nutrition/supplementation in the last three months is the addition of the VPX NO-Shotgun/ Synthesize stack, and, of course my incredible training partner. While my training partner supplies incredible motivation, that motivation would fall on deaf limbs were it not for the building blocks I'm getting from the only legal supplement proven in university studies to build new muscle. More muscle = greater strength. I'm living proof of that!

Get yours today and see if you can prove me wrong!