How Long Should You Workout?

When I was in the gym last Saturday, I noticed an overflow of “weekend warriors.” As I continued training throughout the day, I also noticed that some of those warriors were fast and furious regarding their workouts, and some seemed to be there through multiple sessions that I trained. The million dollar question is: Which workout was most efficient? 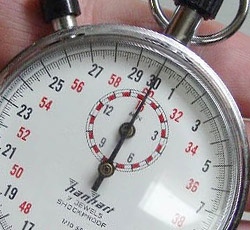 A recent study from the University of Copenhagen, which has been published in the American Journal of Physiology, has shown that 30 minutes of daily training provided equal if not better results than a 60 minute daily workout program.

The study also points to the fact that the subjects had more energy for other daily activities after the 30 minute vs. the 60 minute workout. In addition, the researchers felt that the study group that spent 60 minutes working out probably ate more, therefore lost less weight than expected.

My concern regarding the above study is what EXACTLY was their workout? How can 30 different people have the same intensity during a 30 minute workout as they can a 60 minute workout? The training sessions in this study “were planned to give a light sweat, but participants were expected to give it gas three times a week.”

Personally, I cannot maintain the same intensity for 60 minutes thatI can for 30, so the above study raises my eyebrow.

Now let’s talk about that weekend warrior who is in the gym for 60 to 90 minutes. What he or she does not realize is that after 60 minutes Cortisol begins to release.  Cortisol is considered catabolic and has the opposite effect of testosterone, insulin, and growth hormone. Negative effects of Cortisol include but are not limited to:

Personally, for the nonprofessional athlete, I recommend a routine that consists of three to four times a week of resistance training at lengths of roughly 45 minutes, with one or two days of cardio lasting 30 to 45 minutes.