Maximize Fat Burning - Fuel up before or after Cardio?

Cardio in the morning on an empty stomach, or cardio after a meal? This question is probably one of the Top 10 debated topics in the fitness realm. Over the years I have read countless articles showing evidence for both sides; however, in doing some more research I came across a very interesting study. The study was written by Brad Schonfeld, MSC, CSCS in the February 2011 Strength and Conditioning Journal. 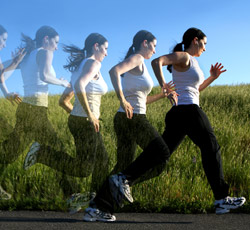 The theory behind fasted cardio is that there is a shift from utilizing carbohydrates, which will allow greater use of stored fat for fuel. However now there is some hard scientific evidence showing that this theory is not true. I will do my best in this blog to explain the highlights of this article keeping it as easy to understand as I can.

One must first learn that there are two parts to burning fat: First there is the phase called lipolysis. This is the process where fatty acids inside fat cells move into the bloodstream. Once you begin physical activity your body immediately starts dumping triglycerides from your fat cells to be used as energy.

The second phase is the oxidation phase. During this stage the fatty acids that are delivered to places like your heart, liver and muscles are oxidized (In layman's terms burned). Think of this stage as the "fuel burning stage."

In this study they found that people who ingested carbohydrates prior to cardiovascular activity had less lipolysis. Therefore they actually had less fatty acids moved into their bloodstream for use for fuel.  With that in mind, this is why people believed that fasted cardio is better because more lipolysis will occur, which in turn would burn more fat. What all of these people did not know is that lipolysis does not dictate the amount of fat burning, it is actually the oxidation process that does. In fact, the study showed that there might possibly be a greater fat burning effect when ingesting carbohydrates and/or protein prior to exercise. The reason being for this is the thermogenic effect(Rising of body temperature in the process of breaking down the food).

All and all, between this study and many others, it has been shown that there really are no major differences in fat loss when doing cardio fasted or after a meal. People should focus on the bigger picture in regards to burning fat. There are so many factors involved such as caloric intake, workouts, intensity, EPOC (see one of my prior blogs), and many other variables. I also realize that there are factors like work, children, gym hours, etc. that dictate when cardio is done.

I feel all of my workouts whether it be resistance training or cardio are way better when I have fuel in me. I feel with this fuel I can work harder which actually leads to more calories being burned.

When do you guys prefer to workout, do you fuel up before or after?