5 Ways to Use Virgin Coconut Oil

Coconuts have been around for hundreds of years, but now all the new hype is revolved around virgin coconut oil! In the past coconut oil has been regarded as being bad, due to the saturated fat content. However, virgin coconut oil is not the same type of oil as saturated hydrogenated oil that goes through processing and is added to foods for an extended shelf life. Coconuts have been used for the past 4000 years according to Sansrkit documentation in Ayuvedic medicine, to treat heart problems, hair loss and even burns. During World War II, it has been said the coconut water was used as an IV for wounded soldiers (1).

Where does it come from? 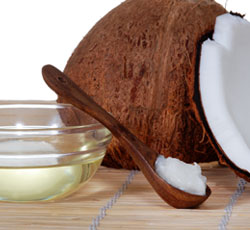 An amazing benefit of coconut oil is that it has been shown to reduce total cholesterol, LDL (bad fat), and increase HDL cholesterol (good fat) (3). Virgin coconut oil also has a high antioxidant capacity, which will scavenge those free radicals from the environment that try to destroy our cells from the inside (4). Coconut oil has also been claimed to deal with certain viruses and bacteria that can cause influenza, ulcers, urinary tract infections and more (4).

How to use Coconut Oil

Do you have any uses or recipes that include virgin coconut oil? Share in the comment section below!