The Importance of Post-Workout Carbs for Recovery (Part 2) 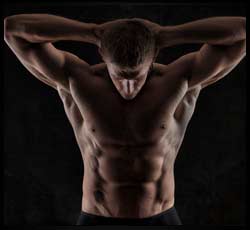 Some of you may have been a little confused when you read that insulin was so important for muscle repair in the last article. Most people think of diabetes when they hear the term “insulin,” so it wouldn’t be surprising if some of you left the article with a confused look on your face. Let’s take a minute to help you to understand it a little better. First off, insulin is a hormone secreted by special cells in the pancreas in response to (among other things) increased blood glucose concentration. The primary role of insulin is to control the transport of glucose from the bloodstream into the muscle and fat cells [1]. Controlling blood/glucose levels is important in weight management, if you have uncontrolled glucose, you are likely to hold more fat, and have a better chance of getting diabetes (a disorder of carbohydrate metabolism resulting from inadequate or ineffective insulin).

What happens after consuming a meal is as follows [1]:

• You eat a meal (hopefully not pizza)
• Blood glucose rises
• Special cells of the pancreas respond by secreting insulin into the blood
• Circulating insulin contacts cell receptors throughout the body
• Receptors respond by shepherding glucose from blood into the cell
• If not used for energy, glucose is assembled into glycogen by muscle and liver cells and stored; the liver can also convert glucose to fat and export it
• End Result: high blood glucose returns to normal as excess glucose is stored as glycogen (can be reversed) and fat (cannot be reversed; which is why Americans are so damn fat!)

But hold on one second! There is one thing you need to understand before you start believing that insulin is the enemy. Yes, insulin does result in fat storage, but only when in excess. Insulin only promotes fat storage when energy intake exceeds energy needs. What I am trying to say is that if you eat too much food for your body, then insulin will be stored as fat. Carbohydrates do raise blood glucose levels, but if you consume just the right amount for your individual needs, it will not result in fat accumulation. What it will produce is energy, and who doesn’t want to have more energy? The less carbohydrates that you consume on a regular basis, the more insulin sensitive your body will become. This is not to say that you should stop eating carbohydrates all-together because that could be catastrophic to your hard-earned muscle, but you should only be consuming the appropriate amount for your body. There are different ideas of how many carbohydrates a physically active person should be consuming; therefore it is fruitless to give you a specific number to calculate for yourself.

Don’t forget about the first article in this series. It stated that spiking your insulin level immediately after working out will stop protein breakdown in its tracks. This is what you are looking for with a post-workout meal, because if you don’t stop protein breakdown, that intense hour and a half you just spent throwing steel around in the gym to pack on some massive muscle will have been a complete waste of precious time and energy. The post-workout meal is the best way to take advantage of your valuable time and fill that one-hour window of opportunity with something that will do your body good. Studies show that during the post-workout time-frame, protein breakdown was decreased by 30% due to insulin infusion [2]. This same study concluded that at rest, insulin was anabolic, while after exercise insulin was anti-catabolic. Insulin also causes vasodilation – meaning more blood flow to the cells. Blood carries nutrients such as protein, amino acids, and carbs - all of which are found in your post-workout meal. So, not only are we stopping protein breakdown, but we are promoting muscle growth, and isn’t that what you want to accomplish? Who would’ve thought that something that causes America to be so obese, is also what makes bodybuilders so freaking massive. Now you know, it is about controlling your insulin levels, and causing an insulin spike at just the right time (post-workout) to build the biggest muscles possible.