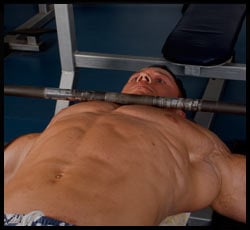 Ask anyone who has ever lifted a weight what question he has been asked most and they will invariably tell you that the question they are asked most is, “how much can you lift?”

“Lift” is, of course, the common name for the venerable bench press. Like it or not, your bench press record is the bellwether by which your strength is gauged by the general public.  So, in order to prove that your balls are truly not stereotypically raisined, your bragging rights as a muscle head are going to be unilaterally measured by your bench press prowess.  Therefore, upping your bench is probably the single most sought after secret in the iron game.

The eventual ability to increase your bench falls into two camps. One group believes that increasing your bench press is a side effect of an overall increase in upper body mass.  The inevitable proof they cite is this simple equation: increased muscle mass = greater strength. Therefore, in order to increase your bench you need to increase the mass of your chest, shoulder, and triceps muscles.

The other camp believes that the bench press is a movement where technique equates to greater lifts.  Proponents of this camp will invariably point to 150 power lifters who can out bench guys who weigh 250.  While such examples are undeniable, the omitted factor is genetic potential.  Simply stated, some guys are just built for benching.  Other guys are not. It’s just the luck of the draw; if you have short arms, big joints, wide clavicles, a deep ribcage, and your pecs are comprised predominantly of fast twitch muscle fibers, then you have the potential to bench the house. If you’re lanky, long-armed, slightly built and narrow, then you might want to take up high diving instead. This is not to say, however, that anyone can’t increase their bench.  Anyone can.

The process is going to take into account the two aspects of what I mentioned above: technique and muscle mass. You have to develop both.  First, lets talk technique.

Technique is something you have to master and the only way you can is by benching and benching often – at least once a week.  You have to find your “groove.”  That groove will ultimately be the plane of movement from lock out (the top of the movement), down to where you naturally bottom out (for some guys that might not be hitting your sternum, but actually a few inches above), back up over your eyes to lock out.

The width of your grip on the bar is going to determine the degree to which your triceps are involved.  Too narrow and you’re using too much arm strength, which is weaker than your pec strength. Too wide, however, stresses your pecs past where they are their strongest and could expose you to injury.  A good starting point is to lie down under the bar and wrap your hands around the bar near where the knurling starts.  Extend your thumbs and move your hands out until the tips of your thumbs line up where the knurling starts.  You might want to extend them a little farther depending on how it feels.  Do not use a false grip! Only use a true grip (with your thumbs wrapped around the bar) and keep your wrists in line with your forearm.  The back of your hand should be in a straight line relative to your forearm.

On the decent, control the weight.  Don’t drop it on your chest! The start position is directly over your eyes, at the bottom, the bar ends up just over your nipples.  Descend until you feel your natural stopping point.  This might be with the bar just touching your chest, or it could be a little bit higher.  You’ll know it when you get there. Don’t force the bar down lower than it  naturally wants to go.  The bottom does not always mean touching your chest, and it certainly doesn’t mean crashing into your chest.  Always control the weight!

On the way up keep your butt and low back on the bench.  No bridging.  Use your power. Always use deliberate strict form and power the bar up in a slight arc from where you bottom out just over your nipples to directly over your eyes.  Once you find that groove stay there. It’s going to take you a while to find your perfect benching form.  Strict movement may cause you to drop a few pounds off your max, but ultimately it will pay off and you’ll be not only stronger, but also much safer.

Of the various muscle fiber types that comprise muscle groups, it is the type II fast twitch fibers that are strong and explosive, as opposed to the slow twitch fibers that don’t grow very large but provide endurance. The more load imposed upon the body, i.e. a bench press of incremental increases in weight for a small number of reps, the bigger the muscle will grow.  You have to target the fiber type that is responsible for power, not endurance.  Greater muscle mass = greater strength.

Keep in mind that in weight lifting/bodybuilding fast twitch Type II muscle fibers recruitment falls off dramatically once you pass the six - eight rep range. Those Type II fibers tire quickly and are not recruited in exercise sets with higher rep ranges. Type I slow twitch fibers do not tire easily, however do not generate much power and are geared toward efficiently.  That means they really don’t have the potential to grow very big – just look a marathon runner if you have any doubt.  If your goal is to build big hard, dense, powerful, muscle then you must target fast twitch Type II fibers. So, load up the weight and lower your reps!

The chest should be trained as a whole with varying exercises that utilize a good combination of angles and a variety of dumbbells and machines, for a total of about 20 sets, including your bench sets. But remember, if you want to up your bench then do your benching first when you are your strongest, and train chest on the first day of your training cycle when you are the most rested.

After some general stretching and warming up, you’ll want to start your bench press training with a couple of light warm up sets for 12 – 15 reps. Then gradually add weight each successive set  for a maximum of eight reps, until you can’t get four reps on your own.  Then do a couple more sets with forced reps (where your spotter assists you so you are getting at least four to six reps). You’ll want to do six to eight sets total.  It should look something like this:

After you have done your regular benching sets, get inside a power rack and adjust the stops so that the bar will stop about two inches above your sternum. Then load up the bar with your Max bench PLUS another 20%. Have the spotters positioned at each end of the bar outside the rack. On your command have them lift the weight up - you should barely be helping. Then, at the top, set yourself in the lock out position and have the guys let go. You resist as the weight comes down - by yourself! Make sure the spotters DO NOT touch the bar until it lands on the stops. As soon as it hits the stops they lift it back up and you resist against the descent again. Do this for as many reps as you can until you can no longer resist the weight and it comes crashing down no matter how hard you try to stop it.

When it is your turn again load up the bar with another 20% (40% more than your max bench) and repeat the process. After that set do one more with an additional 20% (60% over your max).

Keep adding weight in 5% increments with each subsequent workout.  If you find that too much of an increase, back off and try resisting for more reps, then add weight during a later workout. Your muscles are much stronger in the negative movement. Training them in the negative will strengthen the positive movement far greater than if you only used positive contractions.

Using this type of power training along with the negative training system, with proper technique, (and adequate nutrition and supplementation such as the VPX NO-Shotgun/Synthesize stack), and there is no way you wont significantly increase your bench in just a few months.