Everyone has a Weakness!

Everyone has a weakness; something that is difficult for them to beat. Whether it’s - mental or physical, there is always a way to overcome your limitations. For a long time, there were two things I considered to be my greatest physical weaknesses: swimming, and going up-hill in races or in training. 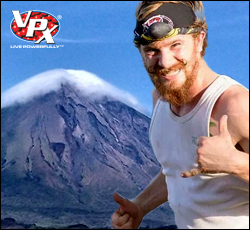 For as long as I can remember, my ability to swim successfully was on the same level as a rock; I sink! Hills? Unfortunately I've always been the one to fall behind and struggle.

Now; what do we do with a weakness? We conquer it! We adapt and we overcome! And finally, we break through our self-limiting barriers- diving into a realm of success! For me, this happened on Isla de Ometepe, Nicaragua at the Fuego Y Agua Devils Double 2014.

During the previous year for packet pick up, all Survival Runners had to swim out and back for 400 meters in order to earn our bib number. This year, we had to swim a total of 800 meters - carrying an egg (which we could not break). The waves were rougher this time around and yet, I conquered what has always been my biggest challenge!

As I went out into the water I started to panic! Luckily fellow VPX teammate John Taylor was there to calm me down. He kept telling me: "Just calm down. Just breathe. Just relax and calm down." I did just that! I slowed my breathing and focused! I reverted back to the seemingly endless hours of training I spent practicing this. Not only did I manage to complete the swim; but I did so without much struggle (in comparison to last year); and I didn’t finish dead last! Successfully, I broke my barrier! I overcame my weakness!

Hills, hills, and more hills... I've always hated hills;  simply because  I have  never been that good with them. I can run well   on flat ground and downhill; but as soon as I start going uphill, I moved slower than  the slowest turtle. I could never keep up with my friends or teammates on long hills. They just tore my legs up!! Chewed me up and spit me out! I knew coming back to Fuego Y Agua, this year we would be going up both volcanoes - each nearly a mile high! This was going to be an uphill battle (pun intended)!

During the Survival Run we had to carry five gallons of water in 1 gallon - jugs all the way up one of the Volcanoes! This was Hell! But I surprised myself and my teammates by taking an early lead. Before you knew it, I was cruising up the volcano at a great pace! Nobody caught up to me - until I took a wrong turn and proceeded a quarter mile in the wrong direction. A few days later during the 100k run, I lead the  group - again up the same volcano for a large portion of the way! Many miles later`, after coming through the 50k, I found myself crawling straight up - on hands and feet - up the second volcano; fighting every inch to climb the mile high monstrosity with my friends Gerardo and Christian! I’m almost certain I would not have made it up there without them..

Within just a couple days, I had already ascended and descended two volcanoes; one of them twice – bringing my total climb to 3! And it was up there - high above the earth where I conquered my weakness!

Find your weakness and make it your strength. Train continuously and have faith that you will break through your self-imposed barriers. And above all else, remember; limits, like fears, are often just an illusion.

This is a guest post by Team Xtreme OCR Athlete Eddie Yanick. He has been running all his life and grew up participating in 5 and 10k’s. Eventually he got into OCR, and found his way into ultra running as well, which led to Ultra Survival Running. He says, “I live to train, and I train to live!”, and strives for greatness every day, in one way or another and lives for adventure. It’s all about the journey.