The Week Before Race Day: 3 Nutrition Tips to Excel!

When it comes to racing, whether it is a 5k, 10k, or an Obstacle Course Race, proper nutrition is vital to ensure optimal performance. It’s particularly important when the race is only a week away. 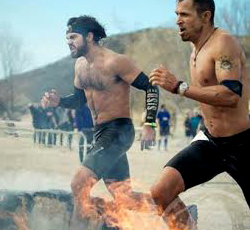 Below are a few tips on ensuring that you race your best by fueling right:

Hydration seems so simple, yet it’s often overlooked, especially at big races where it is easy to replace water with some brews the night before, along with other delicious but counterproductive foods that leave your body dried up!

Hydration means urinating every two to four hours. It should have a light tint, almost the color of lemonade. Best of all, hydration ensures that your body maintains a cooler body temperature, that you are alert and focused and that your heart, muscles and nervous system are performing optimally avoiding cramps all together.

The week before a race, drink plenty of fluids! Water is obviously the first choice, but coconut water is also great because it contains electrolytes.

The Good, the Bad and the Carbs….

We’ve all seen it, maybe even taken part in a trip to a local Italian Ristorante the night before a race to stuff our faces silly with pasta. “Carbo-loading” isn’t inherently bad. It’s just a matter of moderation. Before you compete, you should be eating as you normally would. The night before a race, you may want to consume a more nutritionally dense dinner with lots of color. Sweet potatoes, leafy green vegetables, cruciferous vegetables (such as brussel sprouts and kale), are your friends. So are beets, which have been shown to improve performance in endurance events.

Starchy carbs the night before a race won’t help nearly as much as a heaping plate of veggies with some clean lean meat or plant based protein.

The morning of the race is when you want to consume those starchy carbs, usually three to four hours before you start. A white potato, a bagel, fruits, etc. are packed with carbs and sugar, which are great before you race. It’s best to avoid high quantities of fiber or protein before you get behind the starting line, but you shouldn’t avoid them entirely since its fuel for your muscles. If you are doing an obstacle course race your upper body will need that fuel! Depending on the distance you may want to consume more or less of these foods.

When it comes to trying out something new: by all means do, just not on race day! I would avoid trying a new energy drink before a race since you don’t know how it will affect your system or trying to test out how you run on a fasted stomach. These things may work well for you in the future with plenty of time and preparation, but it’s something I would completely avoid on a big race day. The last thing you want is to duck out of a race because of a sour stomach or massive palpitations.

This is a guest post by VPX Team Xtreme Athlete Miguel Medina. A Southern California native, he is currently living in Pittsfield, Vermont, where he has been challenged by the founders of Spartan Race to survive and build a cabin in the woods in order to train for the 2014 World Championships. In addition, he continues to travel the country as a competitive obstacle racer.